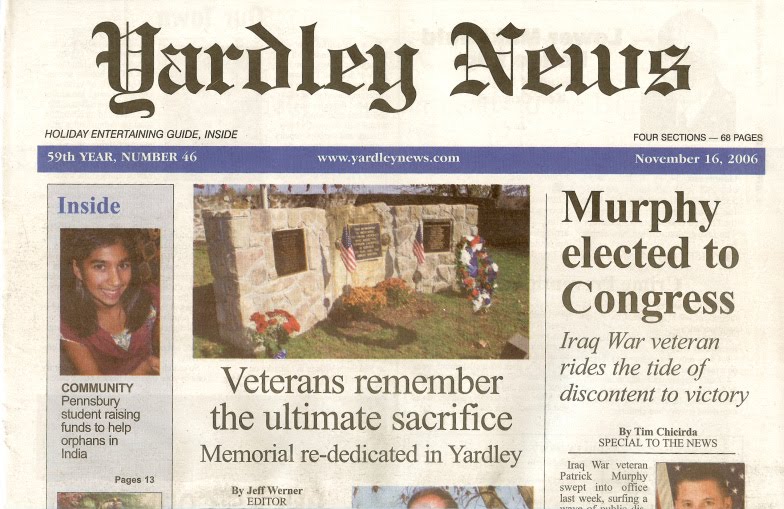 I was just profiled in the Yardley News! The Yardley News is a local weekly newspaper serving the Bucks County and Philadelphia areas. I spoke to John Williams yesterday afternoon and imagine my surprise when I woke up this morning to a Google Alert with a link to the article! I thoroughly enjoyed the interview because I got to talk about 2 of my favorite subjects, my book and the Lower Bucks Chamber of Commerce!
Here’s the full article:Yardley Native and Business Owner Fills in the Blanks for Professionals Looking to Bolster Web Presence

YARDLEY ? Would you show up to a job interview wearing frayed jeans with sandals and a t-shirt? Probably not. So, why leave an equally dismal impression on potential employers with your ?online image??

?It?s important to put on your best game face,? Donna Serdula, owner of DonnaTechDesigns, articulated. ?You want to control your image and have a personal brand, especially one that you are proud of and can market. Right now, there?s such a tight job market, so you want to make sure you are branding yourself as someone your company cannot afford to lose.?

DonnaTechDesigns is a full-time website design consulting firm and studio ?dedicated to assisting small businesses in establishing a presence on the internet through the use of affordable web technologies.?

Serdula, who grew up in Yardley and graduated from Pennsbury High School, is author of the self-help book ?LinkedIn Makeover: Professional Secrets to a Powerful LinkedIn Profile,? which provides individualized social networking instruction to career professionals.

In 1996, following the dawn of the internet, Serdula designed her first website and, in 2005, created her own LinkedIn page.

?The book is an attempt, on my part, to increase awareness about what people can find in their own professions,? said Serdula. ?Basically, LinkedIn is a database of professionals for professionals ? a social network and database.? Serdula added that ?80 percent of employers are using the site to research future employees, so it?s imperative that your LinkedIn profile portrays you as a polished professional.?

Serdula graduated from the Catholic school Rosemont University, which is situated in close proximity to Villanova.

Her book started with humble beginnings as an e-book, but soon evolved into something much more after her father pushed her to write a book.

?At first, I thought I was going to just give it away [the e-book],? she divulged. ?I figured, eventually, that I put a lot into it and my father approached me and said it was important to have a book since I had a lot to say. So, I enhanced it.?

When all was said and done, it took her three months to work out the intricacies of the book.

?I dedicated it to my father,? Serdula said, and added that he was able to see it one week before he passed away.

?Through my book, I wanted potential readers to realize that employers are using Google and LinkedIn to research you, whether you realize it or not.?

In 2008, she was let go from her job, which spurred Serdula?s desire to own her own business, one with an emphasis on social media web design. It?s a subject matter she?s very passionate about.

?Area businesses will approach me with questions about increasing their online presence,? Serdula explained. ?Most of the older marketers don?t fully understand the Internet and how to maximize themselves. If it?s not one-on-one help that I?m providing, it?s speaking engagements at various organizations.?

One of those organizations is our local business group, the Lower Bucks County Chamber of Commerce (LBCCC). In 2009, Serdula was approached by former LBCCC member and business owner, Len Dubas, who told her to join the LBCCC. She said it?s the best piece of advice anyone has ever given her.

?The chamber has helped me grow my business and educate myself on the opportunities to speak and meet with other professionals,? Serdula pointed out.

Serdula?s clientele is localized, although it?s not limited to the Bucks County region, let alone the United States.

?I am dealing with people all over the world,? she said. One week she will converse via web conference to a person in Afghanistan and the next week to clients in India, Australia and New Zealand.

It?s curious to see many common business practices and trends that employers and professionals use in the United States, Serdula said, popping up in other parts of the world.

?It?s really an eye-opener,? she said.

Serdula also said if you?re a Twitter user that it would be prudent to know that the site?s interface meshes very well with LinkedIn. This also goes for the newly unveiled Google Plus.

However, she warns, online social network users must abstain before posting something online that may jeopardize potential job offers, especially on Facebook.

?Employers are looking for the good and the bad on Facebook and other social networking sites,? Serdula said. ?There?s an online etiquette as well. What doesn?t fly in the real world, doesn?t fly online either.?

Social networking websites have a lot of turnover, too. The shelf life for websites like MySpace and Friendster has run dry and, according to Serdula, Facebook may one day replicate that same fate.

?It?s almost like the Wild West with the way its constantly evolving,? she described. ?There?s a bunch of social networking sites that have been replaced by the next best thing.

Serdula tells professionals to boast, to not hold back when marketing ?your brand? to potential employers. After all, who else will?

?I like to think of it as that people are shy about themselves and don?t like bragging,? she said. ?People are worried about getting a job and how to use the internet, but they also understand how LinkedIn is powerful ? social networking in general. It?s a little bit like a puzzle; they kind of get it, but not quite. What I?m doing is nudging them along.?

To find out more about DonnaTechDesigns and Donna Serdula, visit LinkedIn-Makeover.com or visit her personal website, DonnaSerdula.com.